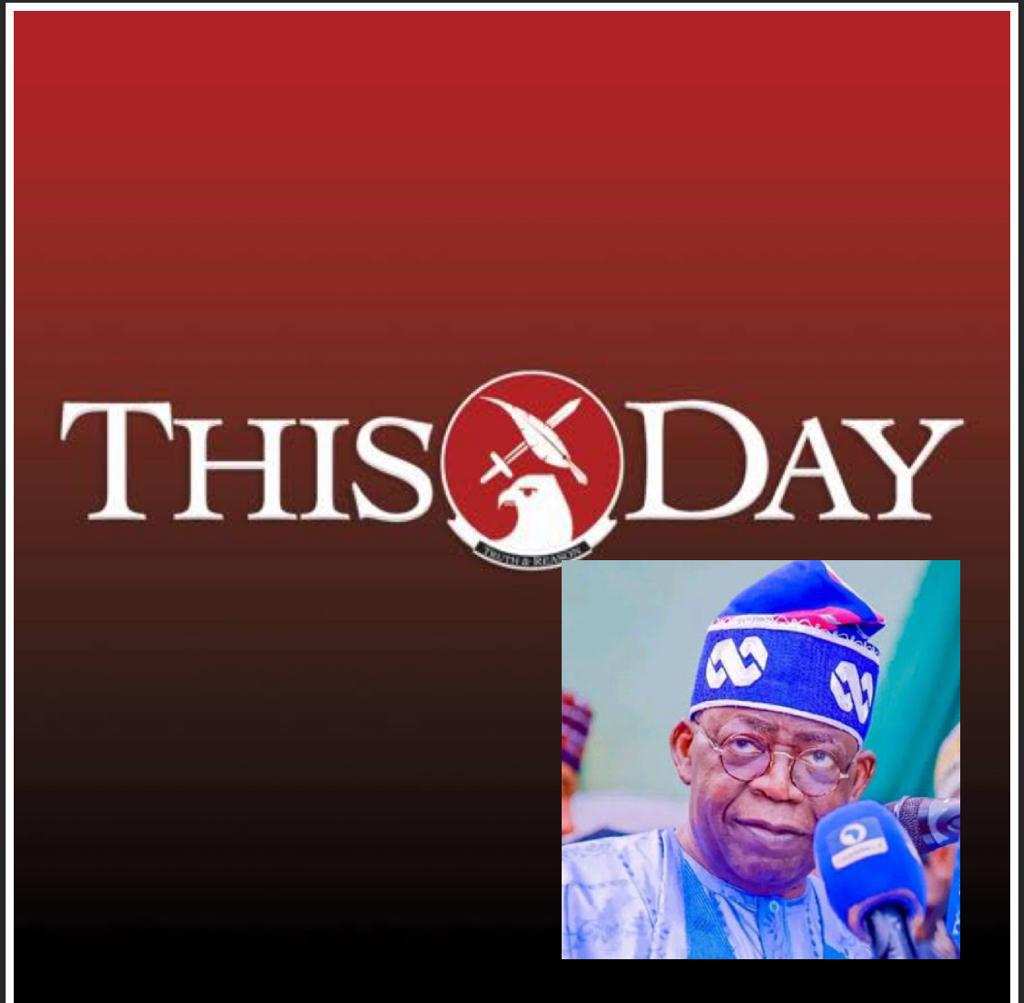 Share
Facebook Twitter LinkedIn Pinterest Email
The Tinubu presidential campaign council, has demanded an open apology from one of the leading newspapers in the country, ThisDay, as it accused the media house of what it called “unconscionable lies.”
It referred to the paper’s publication where it linked late Dr. Kolapo Akande, husband of a serving Commissioner in Lagos, Lola Akande, to drugs case alleged to have been committed by Tinubu, the All Progressive Congress presidential candidate.
Bayo Onanuga, its Director of Media said the “newspaper carried its campaign of calumny against our presidential candidate, Asiwaju Bola Ahmed Tinubu, too far.”
“The report denigrated Kolapo Akande and Asiwaju Bola Ahmed Tinubu, accusing the duo of being involved in drug trade.
“Not caring a hoot about the need to respect the dead, the paper painted Akande as a drug lord, who had ‘lived under the radar’ and had stayed aloof from people”. The council quoted the newspaper.
It said that “Unknown to ThisDay, their imagined ‘hibernating’ Kolapo was an Accord Party candidate for the House of Representatives some years back.”
It accused the media house of pursuing what it called “jaundiced,  cash and carry journalism.”
It went further, “It gleefully reported that Kolapo Akande was the same Mueez Akande mentioned in the shuttered  30 year-old drug investigation against  our candidate in the U.S.
“But it was all false. ThisDay wrote a mere fiction and had relied on a false tweet by one David Hundeyin, a hatchet writer and so-called investigative journalist, who has identified himself as a Peter Obi supporter.”
READ ALSO:
The campaign council said any reasonable publishing house ought to be wary about any information coming from such a biased person.
“But not ThisDay. Anything that portrays Tinubu in a very bad light is fair game, as such a report will justify the tons of Naira that accompanies it.
“The report has, however. turned into a huge embarrassment for the paper and further dented its credibility and integrity. ThisDay should be truly ashamed of its ethical standards. It descended so low that even the despicable David Hundeyin, said to be desperate for  asylum in the UK, excoriated the newspaper for the report.
“Without sounding remorseful, Hundeyin recanted his tweet and wrote: “Not sure why ThisDay published such a story without confirming it, but my information now is that Dr Kolapo Akande who just died is the elder brother of Mueez Adegboyega Akande, (who is still very much alive.) As such I’m taking down my earlier tweet with the ThisDay story link”.
“In his earlier full tweet, the reckless journalist, whose modus operandi is more like Alex Jones of the U.S. based Infowars had suggested that Tinubu masterminded Kolapo Akande’s death, quoting fictional ‘back channel sources’.
“What a wicked, unconscionable lie!”
Onanuga, himself an outstanding journalist of many decade said that at the heart of journalism is the credo that a medium should seek to verify its information before dishing it out to the public.
“ThisDay, just like its sister Arise TV News, has now clearly shown that it does not operate by such standards,” he said
The statement went ahead to state that the Council waited for the past 48 hours, hoping the paper would show some remorse and apologise to the Akandes and Asiwaju Tinubu over the malicious report.
“We are surprised it has not taken such a dignified step.
“We now formally demand a full apology from the paper and its publisher, Prince Nduka Obaigbena, for the utterly unprofessional report.
“We hope henceforth the paper will seek to be driven by the ethical ideals of journalism and not other material considerations.   In view of the established evidence of violation of the core ethics of journalism, we demand that  the Nigeria Press Council take appropriate disciplinary action against Thisday to  save journalism at this sensitive period from the merchants of falsehood and  abusers of the public trust that the press embodies.
“We call on the Independent National Electoral Commission to invoke the relevant sections of the Electoral Act 2022 to sue Thisday and any other medium that commits flagrant violation of editorial rules to the courts.”
Spread the love
Akande APC Onanuga Politics ThisDay Tinubu
Share. Facebook Twitter Pinterest LinkedIn Tumblr Email