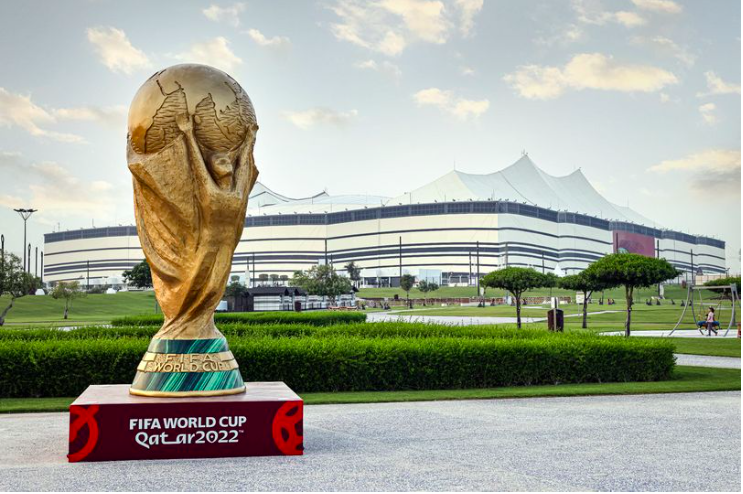 The World Cup in Qatar is a competition of many firsts: the first Mundial to be held in the middle east, the first to fall into the winter season and the first-ever to include female referees.

Throughout the 92-year history of the men’s World Cup, Qatar would be the first time women will be listed among the officials to handle games.

Six out of 36 officials in Qatar are women, further shattering another glass ceiling of gender inclusion in the world’s most popular sport.

Three of the women include Yamashita Yoshimi, Salima Mukansanga and Stephanie Frappart are referees who will be in charge of games at the World Cup.

Through the next one month, these trailblazers will be seen orchestrating matches and imposing FIFA rules on some of the biggest names in football.

The trio will be joined by three more female officials as FIFA selects 69 assistant referees for the World Cup.

Frappart is a French official who began refereeing at the age of 13. Her passion for football was fueled by her father, an amateur player for a local team in her Herblay-Sur-Seine community.

She sacrificed her passion for playing the game to nurture the awareness and decision-making that makes a good referee, and her decision began bearing fruits early.

At just 18, she was already officiating matches for the national U-19 league. By 2011, Frappart was promoted to the Championnat National, the third division of the men’s football league in France.

She became the first female referee in the Ligue 2 division three years later. The burden failed to slow her down, and she was regarded as one of the best officials in the league.

She went on to become the first female referee to officiate a UEFA Champions League game and men’s FIFA World Cup qualifiers.

Mukansanga was born in Rusizi District, West Province, a city about five hours away from Kigali, the Rwandan capital, and football was not her first love.

The Rwandan became the first woman to officiate at the Africa Cup of Nations in the group stages.

She loved basketball, but access to the necessary facilities made her quit, as her attention shifted to football.

Mukansanga decided to become a referee earlier in life, but her dream was nearly cut short after the Rwandan FA refused her licence due to her age.

However, she overcame the barrier and taught herself the laws of the game to improve her knowledge and abilities.

What followed was a litany of successes: her FIFA badge arrived in 2012, and she became a mainstay in the Rwanda league games before continental appearances.

In Tokyo 2021, Mukansanga became the first African woman to be the centre referee of a quarter-final match of the women’s football event at the Olympics.

A few months later, at the 2022 African Cup of Nations (AFCON), she also became the first woman to officiate a match in the competition.

Yamashita is almost the Asian replica of Frappart. Her rise to the summit of the world footballing community has garlanded her with many premierships.

Yamashita officiated at the 2019 Women’s World Cup and at last year’s Tokyo Olympics.

Earlier this year, she became the first woman to officiate a match in the J-League, Japan’s first division.

Assistant Female Referees At The World Cup include;

Neuza Back of Brazil,Karen Diaz Medina of Mexico and Kathryn Nesbitt of America

The aforementioned Back, Medina and Nesbitt will all write their names in the tournament’s folklore.

Each of them have had their different routes into the profession, but will share a unified history-making moment when they travel to Qatar.

Medina began her career in refereeing by pure chance, but believes it is a position that “makes you fall more and more in love every day [with football].”

USA’s Nesbitt started refereeing as a summer job, but up until the 2019 WWC was a professor of chemistry.

In 2020, she was named the MLS Assistant Referee of the Year – becoming the first woman to achieve such a feat.

“It has been an absolute honour to have people say that I’ve become a role model for women,” Nesbitt told FIFA.

37-year-old Back didn’t even realise that she had been selected in the 69-name list until she heard it in the press.

“It’s very cool, indescribable, it’s a moment of joy, of gratitude, and also a little sense of responsibility,” Back told the media.

Despite any outside pressures, all the ground-breaking officials selected for Qatar are relishing the opportunity to represent women referees in what could be a defining moment going forward.

Banning of Beer By Hosts

Alcohol is largely prohibited in the Islamic nation but the organisers sparked anger from fans with their dramatic decision.

Football’s world governing body FIFA said beer would not be sold to fans around any of the eight World Cup stadiums following discussions with the hosts.

“A decision has been made to focus the sale of alcoholic beverages on the FIFA Fan Festival, other fan destinations and licensed venues, removing sales points of beer from Qatar’s FIFA World Cup 2022 stadium perimeters,” FIFA said in a statement.

Dozens of Budweiser beer tents had already been set up at grounds ahead of the first game between Qatar and Ecuador.

The host nation has predicted that more than one million fans will visit the country for the 29-day tournament and FIFA has had a longstanding sponsorship deal with Budweiser, which is owned by drinks giant.

Beer will remain available in VIP suites in stadiums, in some fan zones and in some hotel and restaurant bars.

The Football Supporters’ Association, which represents fans from England and Wales, criticised the move, saying it was symptomatic of a “total lack of communication” with supporters from the organisers.

“If they can change their minds on this at a moment’s notice, with no explanation, supporters will have understandable concerns about whether they will fulfil other promises relating to accommodation, transport or cultural issues,” it said in a statement.

The Oldest Players To Participate At Qatar 2022 World Cup

The goalkeeper of the Mexico national team, Alfredo Talavera, is the oldest player who is likely to participate in the Qatar 2022 World Cup.

Across all the squads, he was born before the likes of Pepe from Portugal, by a single year and Dani Alves from Brazil.

There are a number of legends of the Beautiful Game making the trip, in what is (surely) going to be their last FIFA showpiece tournament.

Brazilian Thiago Silva, who has 38 years behind him, and there is also Cristiano Ronaldo and Luka Modric (former teammates at Real Madrid), as well as the América goalkeeper, Guillermo Ochoa.

Ochoa and Ronaldo will play in their fifth World Cup in Qatar 2022, while Alves will feature for the third time after participating in 2010 and 2014, but being left out of the squad for Russia 2018.

Below is a list of the oldest players to have been named in the 831 across the national team squads.

A lot of observers from Africa are keenly waiting to see if any team from the continent finally makes it to the semi-final.

Senegal would have been favourites to break the jinx. But the injury picked up by star striker, Sadio Mane, will see him miss the entire tournament.

So, let’s have our fingers crossed but we’ve to be realistic. We know who the usual suspects will be to win it.

What we don’t know is what a winter World Cup will look like.