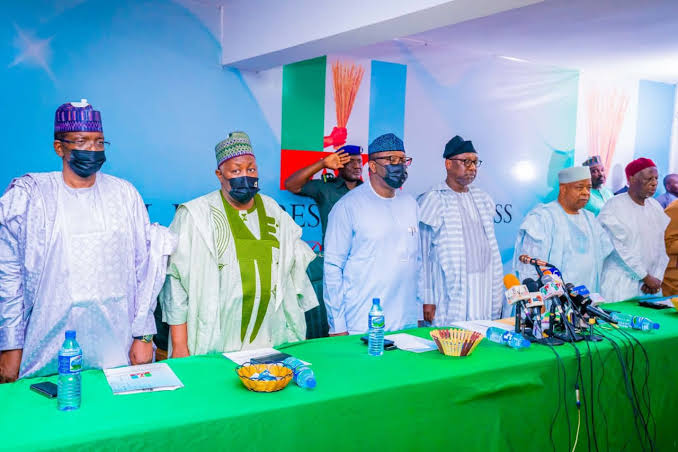 Newly installed acting chairman of the All Progressive Congress, Governor Sani Bello on Wednesday wielded the big stick by slicing off the names of many from the convention committee earlier put in place by his predecessor, Governor Mai Mala-Buni.
Bello, while inaugurating the sub-committees on Wednesday at the APC National Secretariat in Abuja, admitted that the earlier committee was too large for any serious job.
The latest list released came down to 107 members giving assurance that the party is set for March 26 date.
Bello told party stalwarts, “We task you to exhibit these qualities to ensure the success of the national convention. I know a lot of our party faithful wanted in one way or the other to serve in various committees as their support or contributions towards a healthy party.
“However, we must be mindful that we cannot accommodate everyone in the sub-committees.”
The new caretaker committee of the party now comprise 12 members excluding the former chairman Buni.
The Governor of Jigawa State, Mohammed Badaru, will now be the chairman of the Election Committee at the conference while the Governor of Katsina State, Aminu Bello Masari, is thec Chairman of the Convention Screening Sub-Committee while Governor Hope Uzodima is the Chairman of the Appeal Committee.
Bello, in his comment later said the committee has ensured that the selection process of the subcommittee members was transparent and made based on the track records, experience, and loyalty of the committee members to the party.
He said, “I know a lot of our party faithful want to serve in one way or the other in various committees as their support or contribution. However, we must be mindful that everyone cannot be a member of the subcommittees.
“So, I urge those whose names were screened out to remain patient and continue to work with other party members for the success of our great party.
“For those of you who have been monitoring events at the National Secretariat, we have started frantic efforts to ensure that we get a hitch-free convention. We are equally making efforts to see that we reposition the party towards successful elections in the future.
“I urge all the members of the subcommittees to bring their wealth of knowledge and experience to ensure the success of their assigned tasks. We must use our collective talents to develop strategies to build a better, more inclusive, and resilient party.
“I also want to commend the members of the APC CECPC for a job well done despite the limited time given to them. I believe we will rise from this unprecedented challenge to be a stronger party where everybody has the opportunity to succeed.”