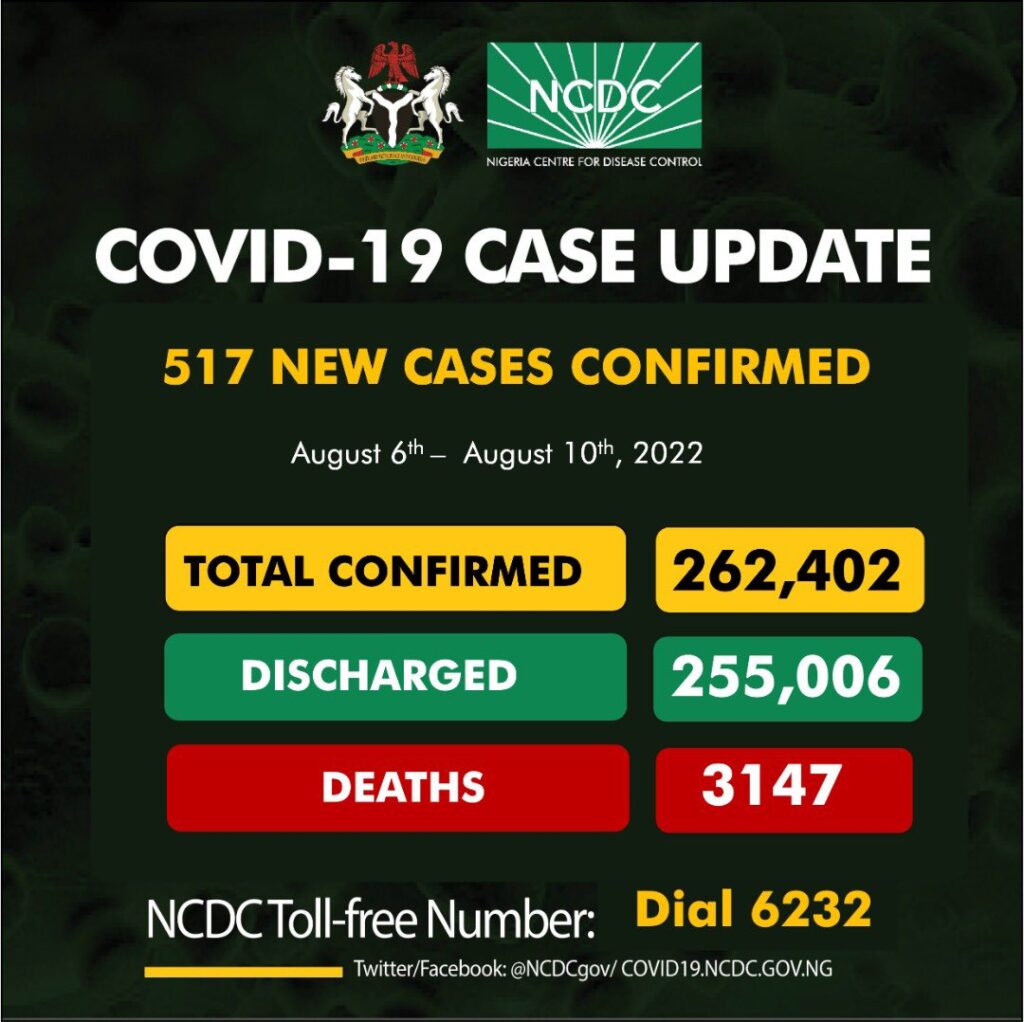 The NCDC made this known via its official website on Thursday.
It said that out of the 517 additional infections recorded, Akwa Ibom reported 293 cases, while Lagos state recorded 101.
This is the highest case count in the month of August.
It overturned the previous record of 496 infections reported between July 28 and Aug. 1; and 412 infections reported between Aug. 2 and Aug. 5.
The NCDC said that the 517 cases, which were recorded in 13 states and the Federal Capital Territory, have raised the total number of infections to 262,402.
According to it, the FCT has 13 cases of the virus, Ekiti has 11, Delta and Kano reports nine each, Bayelsa has seven and Kaduna records six cases.
Others include Oyo- five, Abia- three, Kwara- two, Nasarawa -two and Plateau- two while five states – Cross River, Ogun, Osun, Ondo, and Sokoto reported zero cases.
The agency, however, said that 525 persons had been discharged in the last five days after recovering from the virus, thus bringing the total number of discharged persons to 256,006.
It said that the death toll from the COVID-19 disease in the country stayed at 3,147 with no additional deaths reported on Thursday.
The NCDC stated that the report included a backlog of 258 cases in Akwa Ibom from July 3.
It added that the states of  Cross River, Ogun, Osun, Ondo, and Sokoto recorded zeros case.
It urged Nigerians to take practical steps to prevent the spread of COVID-19.
“Let us all take responsibility to prevent the spread of the disease and limit the risk of infection among all ages.
“Get vaccinated, wear a mask, wash your hands frequently, coughb or sneeze into your elbow and report when sick,” it said.
The National Primary Health Care Development Agency (NPHCDA) says no fewer than  28,120,290 of total eligible persons targeted for COVID-19 vaccination in the country are fully vaccinated.
The NPHCDA said that about 11,848,002 of the total eligible persons targeted for COVID-19 vaccination, were partially vaccinated.
Meanwhile, In the last five days, Yobe state moved up the ladder from 20th position to 18th and currently at 14 percent coverage of full vaccination.
The NPHCDA said that Enugu state was the best performing state in the South-East Zone based on fully vaccinated performance, having reached 17 per cent coverage.