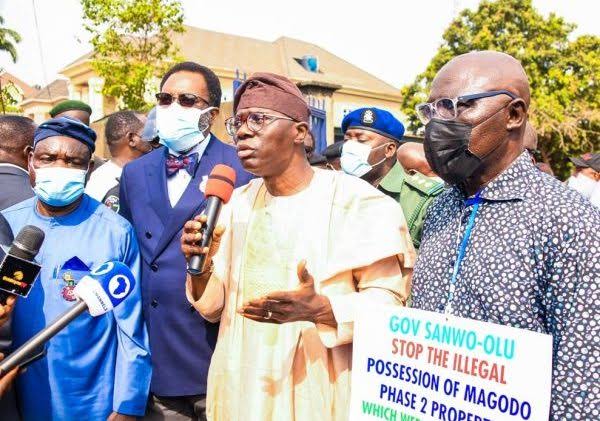 A Chief Superintendent of Police on Tuesday stubbornly refused instructions from Governor Babajide Sanwo-Olu to call his superiors and tell them that the detachment of policemen deployed in Magodo estate had no business being there.

The CSP, who stood in front of Sanwo-Olu and his entire cabinet, said the Governor should himself call the Inspector General of Police and the Attorney General of the Federation whose order he was carrying out to invade the disputed Magodo Estate in Lagos.

Residents and property owners had gathered at the gate of the estate as early as 6am on Tuesday to protests against continued invasion of their estate by hoodlums who were marking properties for demolition.

The hoodlums came under the cover of policemen who were allegedly deployed from Abuja.

Those who had thought the arrival of the governor was needed to take the policemen out of the estate were mistaken as the leader of the police team refused to take his men out and also insisted he could not call his superiors directly for any other instructions other those he had been given.

Many people, including members of Sanwo-Olu’s cabinet watched in disbelief as the CSP, though, bowing his head in respect, told the Governor he could move against the orders of his superiors.

The governor, after many entreaties, left the scene and told journalists he would go and make calls to those mentioned by the CSP and revert.