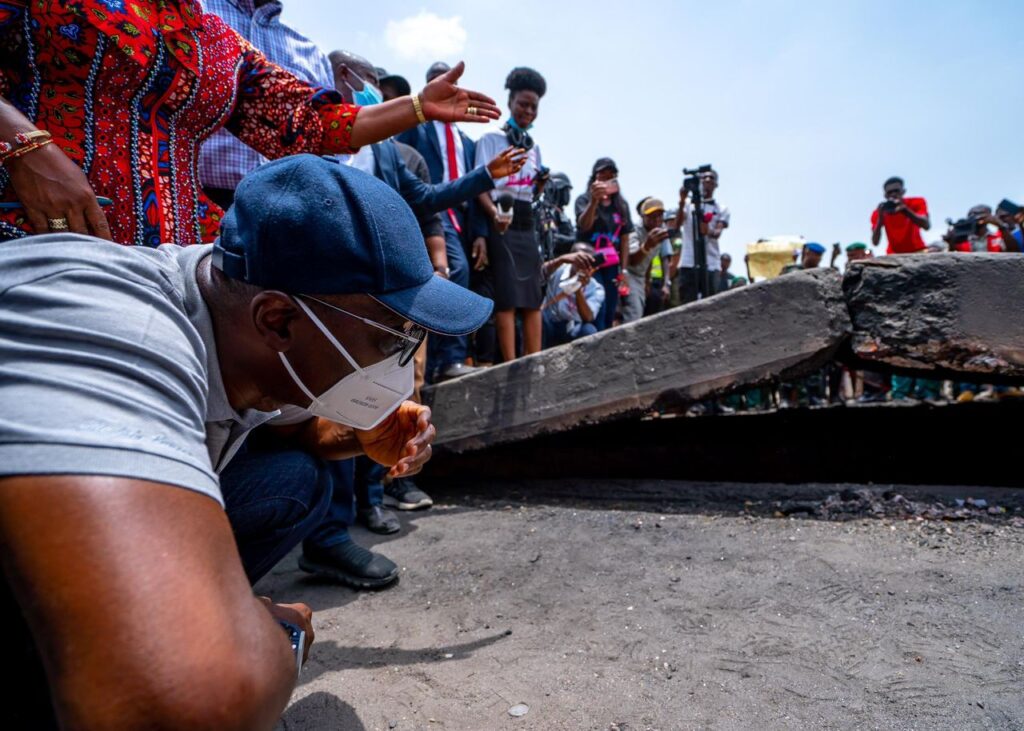 Gov. Babajide Sanwo-Olu of Lagos State has said allowing traders to continue doing business under the burnt Apongbon Bridge will be reckless on the part of government.
Sanwo-Olu said this on Monday, while on an inspection of the Apongbon Section of Eko Bridge, which caught fire on Wednesday.
He said that the federal and state governments had given the traders seven days ultimatum to vacate the bridge
The governor said the order still stood, hence, the deadline would expire on Wednesday.
According to him, the state and local governments will meet with representatives of the traders to sort out the possible place to relocate them, to ensure they continue to earn their livelihood.
”The level of destruction is extremely unfortunate. This is a clear testimony of how public assets should not be turned to. We are going to start excessive clearing of the place.
”To go back to how it is been done, is to mean that we are just being reckless, it will make us completely irresponsible, because we cannot assure of the safety of the bridge.
”We cannot just allow all of that to happen. They are completely illegal. And there are things that we should not have around us and in a big city like this, it is not acceptable,” he said.
The governor said that in the last two years, the state had eight fire incidents affecting various bridges, hence, the need to sanitise the flyover areas.
He urged residents to take ownership of government assets, to forestall recurrence of such incidents, which had been affecting the economy adversely.
Earlier, the traders had carried placards at the Apongbon Section of Eko Bridge in Lagos Island, appealing to the Lagos State Government to reverse the planned relocation of the market.
The traders said that they were responsible citizens, adding value to the Nigerian economy through the businesses going on in the market.
Under the auspices of the Akpongbon/Ebute-Ero Marketers’ Association, they said that they had occupied the place for 50 years.
They pleaded with the governor not to displace them, as they earn their livelihood from the market.
The traders carried placards, which read: ”We are not criminals, please help us”, ”Don’t displace us, we are traders, We add value to Nigerian economy”, among others.