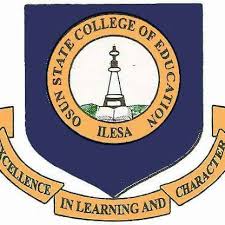 The Governor of Osun, Gboyega Oyetola and the opposition People’s Democratic Party on Friday traded words over the upgrade of the College of Education Ilesa to a university.
The Governor had on Thursday announced conversion of the college to a university but added that he had engaged prominent consulting firm, KPMG to conduct an audit to determine the sustainability of the upgrade.

But in its reaction on Friday, PDP asked the Governor to stop deceiving the people of Ilesa in particular and Osun in general.
The party said pronouncing the college to become a university at the same
Time appointing KPMG to determine sustainability amounted to fraud.

In a statement titled “How Oyetola Deceived Ijesha People on University Upgrade” which was signed by Oladele Bamiji Hob, the PDP accused Governor Oyetola of deliberately giving false hopes when he knows that it will take KPMG no fewer than 7 months to complete feasibility study.

PDP stated, “The Governor directly set up Ijesha people, created a free gift and deliberately ensured that even the gullible can read the fraud as a mark of his insult on the collective sensibility of Ijesha people.”
It said Ijesha people are world class intellectuals who can read in between the lines of political and electioneering subterfuge. It added, “A Governor who has less than six months in office is promising a University upgrade based on a KPMG study that will take a year in the first instance to accomplish. In effect, the promise is designed to secure votes in July while KPMG is sure to return a negative verdict on the feasibility of the project after a year.”

PDP said it would like to alert the state that KPMG will charge at least five percent of the entire project cost, meaninig that the Governor is not only dancing on the yearning of the people but also intend to use the process to siphon money out of the state.

PDP stated further, “To confirm that the whole upgrade announcement is a political ruse, we are aware that contracting KPMG will take nothing less than two to three months and the firm will take at least eight to 10 months to complete the assignment. The people would have been hoodwinked during elections as KPMG as a world reknown consultancy firm will directly contradict the upgrade announcement by the Governor.

“We therefore call on Ijesha sons and daughters to be aware of the Governor’s mendacious subterfuge on Ijesa land. Ijesas are too steeled and sophisticated to be crushed with a greek gift. “If the Governor is really genuine with his intention, such policy decision should have been taken two or three years ago. “The state government would have had sufficient ground to design appropriate agenda for the upgrade. Making such announcement on the eve of election is an unpardonable denigration of the centuries of accomplishments of Ijesha people in various sphere of life.

“Governor Oyetola’s conduct amounted to playing the “Lagos game” on the people and such immoral act should be punished with stern rebuke of his re-election bid come July. PDP as a party has a well thought out educational plan for Osun state including upgrade of some existing institutions including the Ilesha College of Education. Our agenda however takes into account the state of existing institutions as well as sustainability plan beyond political considerations.”

The party said it dared Governor Oyetola to actualise what it called “the hollywood announcement of the upgrade” to prove he is not deceiving the good people of Ijeshaland.
“Any attempt to throw up excuses now being hibernated in processing the upgrade will not do him any good.

“For lying to Ijesha, we urge sons and duaghetrs of Ijesha land to get their PVC ready and vote out Oyetola in July. Rejecting his re-election bid is the appropriate response to an administration that thrives mainly on propaganda. “
But the Spokesman to the Governor, Ismail Omipidan, said the PDP has lost touch with reality.
He said the PDP in Osun has forgotten that the Governor has, in the last three years, always thought through his administration’s programmes and policies.

Omipidan said “ before the announcement was made on Thursday, the Government had engaged a consultant to work through the upgrade’s sustainability plan to ensure a hitch-free process.

“It is unfortunate that the PDP has decided to play politics with important issues. We know they are looking for something and anything to hang-on for political campaign like it did 2018, but the people have seen clearly that Governor Oyetola has done well and has nothing to do with deceit.

“Governor Oyetola has in the last three years plus fulfilled every promise he made. And this, too, won’t be different. Ijesa people know Oyetola; they know he is a man of impeccable character, whose word you can always take to the bank and you will return smiling.”