Breaking:Wike,Makinde,Others Pull Out of PDP Presidential Campaign,Insist on Ayu Must Go 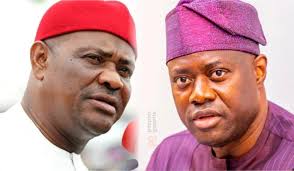 Rivers State Governor, Nyesom Wike,his counterpart in Oyo,Seyi Makinde and other members of the ‘Ayu must go’ group have distanced themselves from the  Presidential Campaign activities of the People’s Democratic Party, PDP.

Their resolution was reached in Port Harcourt, Rivers State after their lengthy meeting that ended in the early hours of Wednesday.

Arising from the meeting, they insisted that the PDP National Chairman, Iyorchia Ayu must resign his position as the chairman of the party if Governor Wike’s group must partake in the Presidential campaign activities of the party.