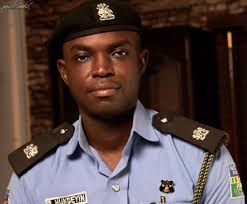 Lagos State’s Public Relations Officer, SP Benjamin Hundeyin on Wednesday has expressed concern over the rate at which Nigerians are no longer scared of prison.
He wondered if there’s anything intriguing about it.
This is in response to a post by the Lagos State Police Command that said they have arrested an ex-convict who was suspected to have stolen two generators.
The suspect was identified as one Yekini Opeyemi, aged 35 and was arrested at about 4pm around Ojota with other accomplices who were also reported to be loading a Firman and Tigmax generator of 2.8 KVA each into a Volkswagen car.
Although he had the company of others in carrying out the heinous, his accomplices fled the scene on sight of the police officers, leaving Opeyemi behind.
According to the police command, investigations revealed that Opeyemi had just arrived Lagos last week where he was employed as a security guard at Ojota New Garage.
It was noted that this would be the fourth time Opeyemi would be arrested on different occasions for different reasons and not being able to provide any convincing explanation about the generators.
Hundeyin in his tweet responded to the post saying,
“Why aren’t some people scared of prisons anymore? Or is there something enticing therein?
However, many other responses have trailed Hundeyin’s post by other social media users.
Obozuwa Sule, @Mechninja1 said,
“The prisons in Nigeria are not doing enough of being a correctional center or a place where inmates should be properly rehabilitated. Skills acquisition & forms of training to better the inmates ought to be taught. You don’t mix with hardened criminals and remain the same.”
OceanWalker @IamOwad commented,
“Simple, because the prison isn’t reforming them and only leave them more hardened. For others they have no where else to go and nothing to offer the society , so it’s more of a home to them than the real world”
$WolfKing @muthieu added,
“Because our prison system in Nigeria isn’t about correction but punishment and when they get back out, they have nothing to offer to the society which will make it easier for them to go back to what brought them to prison at first.”