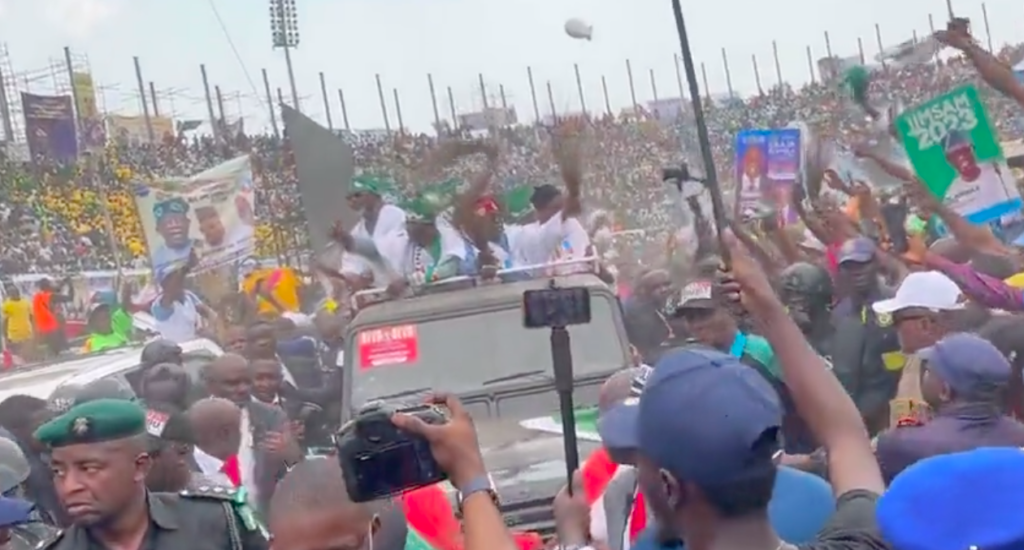 Presidential candidate of the All Progressive Congress, Bola Tinubu on Saturday, described as tragic the 16 years the Peoples Democratic Party held the affairs of Nigeria.

He said within the 16 years, the party at the centre never remembered the Lagos-Badagry Highway, Second Niger Bridge, Kafanchan Road and others.

He spoke at the Teslim Balogun Stadium, Surulere, Lagos on Saturday the rally for him and the Lagos State Governor, Babajide Sanwo-Olu.

It was a huge crowd of supporters who filled the stadium venue of the rally in different campaign groups.

The arrival of our presidential candidate, Asiwaju Bola Tinubu at the Teslim Balogun Stadium for his Lagos presidential rally. pic.twitter.com/fGjENnmjkT

“We will do our best. It is not easy at a starting point but Nigeria has seeing progress.

“I know one man,one selfish man he’s been running since 1999,his name is Atiku.

“He ran on the platform of PDP,he failed. He came to ACN and we accepted him and worked for him wholeheartedly but he betrayed us. Tell him through your PVC that enough is enough. Retire him and his party, PDP.

“PDP was in government for sixteen years yet nothing to show for it. They were given you estimated billing for the sixteen years.

“They didn’t remember Badagry Expressway,East-West Road,Kaduna Expressway, Lagos-Ibadan Expressway, Abuja-Kaduna train, Second Niger Bridge and other laudable projects executed by President Buhari. All were forgotten while PDP was in government. They are ingrates.

“Go and take your PVC and vote for APC.

Thanking the governor of Lagos State, Babajide Sanwoolu and his deputy Femi Hamzat for putting Organising the rally under a peaceful atmosphere

“Thank you from the bottom of my heart. It is a broom revolution.

“God will bless the governor and his cabinet who put these together. I don’t think anything is missing here today.

“You’ve seen the success of Babajide Sanwoolu and his deputy, Quadri Hamzat. They are all going back. They are repeaters,you will repeat the class for them, for the progress and stability of Lagos State.

Speaking earlier,the National Chairman of the party, Adamu Abdullahi commended party supporters for coming out en-mass to grace the rally.

Among others who spoke include, the host governor, Babajide Sanwoolu,Simon Lalong of Plateau State, Atiku Bagudu of Kebbi State and Speaker House of Representatives, Femi Gbajabiamila.